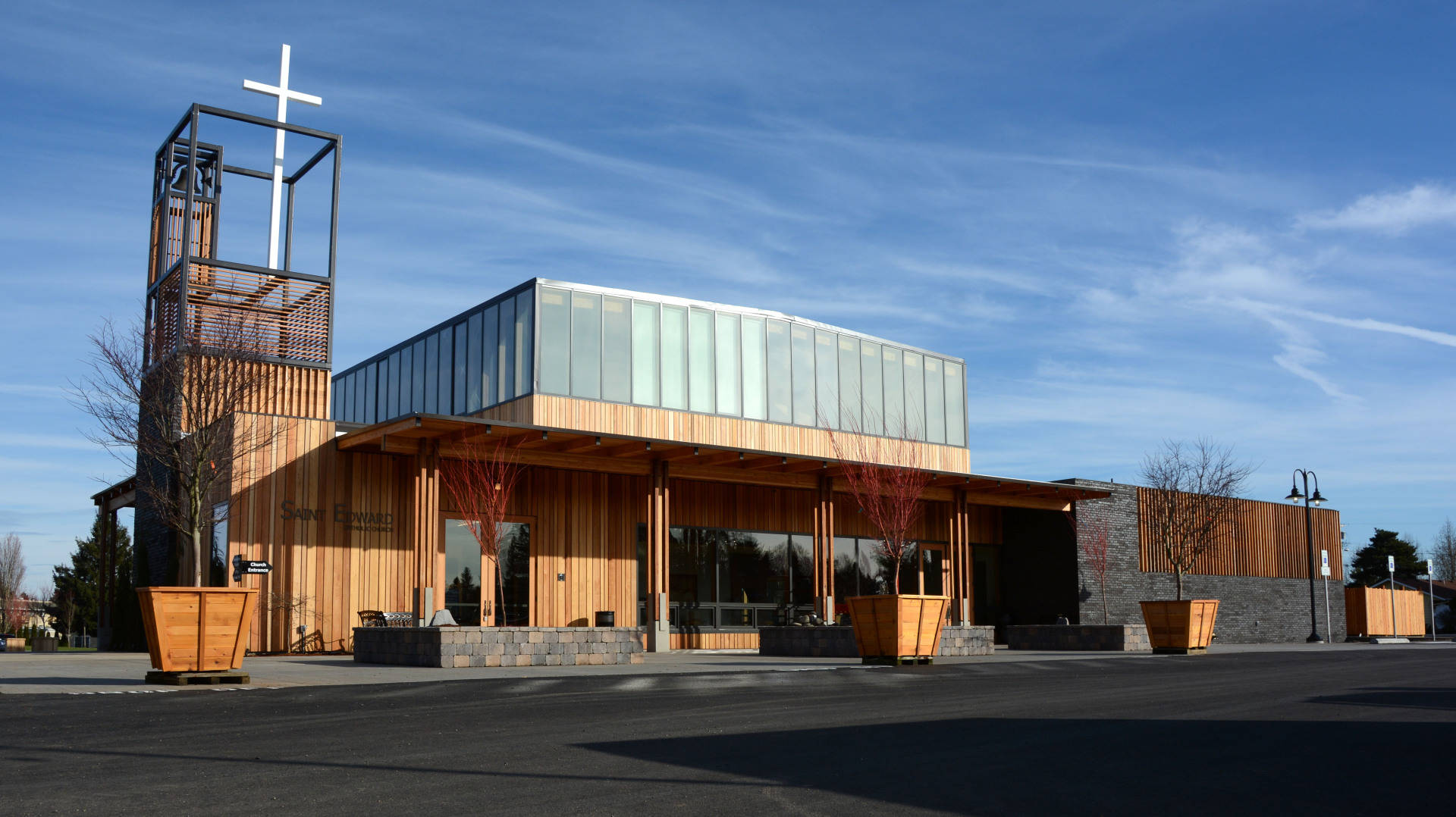 Becoming Catholic is one of life’s most profound and joyous experiences. Some are blessed enough to receive this great gift while they are infants, and, over time, they recognize the enormous grace that has been bestowed on them. Others enter the Catholic fold when they are older children or adults. This tract examines the joyful process by which one becomes a Catholic.

A person is brought into full communion with the Catholic Church through reception of the three sacraments of Christian initiation—baptism, confirmation, and the holy Eucharist—but the process by which one becomes a Catholic can take different forms.

Those who have been validly baptized outside the Church become Catholics by making a profession of the Catholic faith and being formally received into the Church. This is normally followed immediately by confirmation and the Eucharist.

Before a person is ready to be received into the Church, whether by baptism or by profession of faith, preparation is necessary. The amount and form of this preparation depends on the individual’s circumstance. The most basic division in the kind of preparation needed is between those who are unbaptized and those who have already become Christian through baptism in another church.

Preparation for the Unbaptized

Preparation for reception into the Church begins with the inquiry stage, in which the unbaptized person begins to learn about the Catholic faith and begins to decide whether to embrace it.

The first formal step to Catholicism begins with the rite of reception into the order of catechumens, in which the unbaptized express their desire and intention to become Christians. "Catechumen" is a term the early Christians used to refer to those preparing to be baptized and become Christians.

The catechumenate’s purpose is to provide the catechumens with a thorough background in Christian teaching. "A thoroughly comprehensive catechesis on the truths of Catholic doctrine and moral life, aided by approved catechetical texts, is to be provided during the period of the catechumenate" (U.S. Conference of Bishops, National Statutes for the Catechumenate, Nov. 11, 1986). The catechumenate also is intended to give the catechumens the opportunity to reflect upon and become firm in their desire to become Catholic, and to show that they are ready to take this serious and joyful step (cf. Luke 14:27–33; 2 Pet. 2:20–22).

After the rite of election, the candidates undergo a period of more intense reflection, purification, and enlightenment, in which they deepen their commitment to repentance and conversion. During this period the catechumens, now known as the elect, participate in several further rituals.

The three chief rituals, known as scrutinies, are normally celebrated at Mass on the third, fourth, and fifth Sundays of Lent. The scrutinies are rites for self-searching and repentance. They are meant to bring out the qualities of the catechumen’s soul, to heal those qualities which are weak or sinful, and to strengthen those that are positive and good.

During this period, the catechumens are formally presented with the Apostles’ Creed and the Lord’s Prayer, which they will recite on the night they are initiated.

The initiation itself usually occurs on the Easter Vigil, the evening before Easter Day. That evening a special Mass is celebrated at which the catechumens are baptized, then given confirmation, and finally receive the holy Eucharist. At this point the catechumens become Catholics and are received into full communion with the Church.

Ideally the bishop oversees the Easter Vigil service and confers confirmation upon the catechumens, but often—due to large distances or numbers of catechumens—a local parish priest will perform the rites.

The final state of Christian initiation is known as mystagogy, in which the new Christians are strengthened in the faith by further instruction and become more deeply rooted in the local Catholic community. The period of mystagogy normally lasts throughout the Easter season (the fifty days between Easter and Pentecost Sunday).

For the first year of their life as Christians, those who have been received are known as neophytes or "new Christians."

The means by which those who have already been validly baptized become part of the Church differs considerably from that of the unbaptized.

Because they have already been baptized, they are already Christians; they are, therefore, not catechumens. Because of their status as Christians, the Church is concerned that they not be confused with those who are in the process of becoming Christians.

"Those who have already been baptized in another church or ecclesial community should not be treated as catechumens or so designated. Their doctrinal and spiritual preparation for reception into full Catholic communion should be determined according to the individual case, that is, it should depend on the extent to which the baptized person has led a Christian life within a community of faith and been appropriately catechized to deepen his or her inner adherence to the Church" (NSC 30).

For those who were baptized but who have never been instructed in the Christian faith or lived as Christians, it is appropriate for them to receive much of the same instruction in the faith as catechumens, but they are still not catechumens and are not to be referred to as such (NSC 3). As a result, they are not to participate in the rites intended for catechumens, such as the scrutinies. Even "[t]he rites of presentation of the creed, the Lord’s Prayer, and the book of the Gospels are not proper except for those who have received no Christian instruction and formation" (NSC 31).

For those who have been instructed in the Christian faith and have lived as Christians, the situation is different. The U.S. Conference of Bishops states, "Those baptized persons who have lived as Christians and need only instruction in the Catholic tradition and a degree of probation within the Catholic community should not be asked to undergo a full program parallel to the catechumenate" (NSC 31). For this reason, they should not share in the same, full RCIA programs that catechumens do.

The timing of their reception into the Church also is different. The U.S. Conference of Bishops states, "It is preferable that reception into full communion not take place at the Easter Vigil lest there be any confusion of such baptized Christians with the candidates for baptism, possible misunderstanding of or even reflection upon the sacrament of baptism celebrated in another church or ecclesial community . . . " (NSC 33).

Rather than being received on Easter Vigil, "[t]he reception of candidates into the communion of the Catholic Church should ordinarily take place at the Sunday Eucharist of the parish community, in such a way that it is understood that they are indeed Christian believers who have already shared in the sacramental life of the Church and are now welcomed into the Catholic Eucharistic community . . ." (NSC 32).

Christians coming into the Catholic Church must discuss with their pastor and/or bishop the amount of instruction needed and the time of their reception.

The sacrament of baptism removes all sins committed prior to it, but since Christians have already been baptized, it is necessary for them to confess mortal sins committed since baptism before receiving confirmation and the Eucharist.

In some cases, this can be difficult due to a large number of years between the Christian’s baptism and reception into the Catholic Church. In such cases, the candidate should confess the mortal sins he can remember by kind and, to the extent possible, indicate how often such sins were committed. As always with the sacrament of reconciliation, the absolution covers any mortal sins that could not be remembered, so long as the recipient intended to repent of all mortal sins.

Christians coming into the Church should receive the sacrament of reconciliation before their reception into the Church (there is no established point for when they should do this) to ensure that they are in a state of grace when they are received and confirmed. Their formation in the faith should stress that frequent confession is part of Catholic life: "The celebration of the sacrament of reconciliation with candidates for reception into full communion is to be carried out at a time prior to and distinct from the celebration of the rite of reception. As part of the formation of such candidates, they should be encouraged in the frequent celebration of this sacrament" (NSC 36).

The Christian fully enters the Church by profession of faith and formal reception. For the profession of faith, the candidate says, "I believe and profess all that the holy Catholic Church believes, teaches, and proclaims to be revealed by God."

The bishop or priest then formally receives the Christian into the Church by saying, "[Name], the Lord receives you into the Catholic Church. His loving kindness has led you here, so that in the unity of the Holy Spirit you may have full communion with us in the faith that you have professed in the presence of his family."

The bishop or priest then normally administers the sacrament of confirmation and celebrates the holy Eucharist, giving the new Catholic the Eucharist for the first time.

In some situations, there may be doubts whether a person’s baptism was valid. All baptisms are assumed valid, regardless of denomination, unless after serious investigation there is reason to doubt that the candidate was baptized with water and the Trinitarian formula (". . . in the name of the Father and of the Son and of the Holy Spirit"), or that the minister or recipient of baptism did not intend it to be an actual baptism.

If there are doubts about the validity of a person’s baptism (or whether the person was baptized at all), then the candidate will be given a conditional baptism (one with the form ". . . if you are not already baptized, I baptize you in the name of the Father and of the Son and of the Holy Spirit").

"If conditional baptism . . . seems necessary, this must be celebrated privately rather than at a public liturgical assembly of the community and with only those limited rites which the diocesan bishop determines. The reception into full communion should take place later at the Sunday Eucharist of the community" (NSC 37).

Waiting for the Day!

It can be a time of anxious longing while one waits to experience the warm embrace of membership in the Church and to be immersed into Catholic society. This time of waiting and reflection is necessary, since becoming a Catholic is a momentous event. But waiting can be painful as one longs for the sacraments, especially the Eucharist, and the joys of Catholic life—the security that being a faithful Catholic bestows. Yet even before being received, those waiting to be fully incorporated already have a real relationship with the Church.

For those who are already Christians, their baptism itself forms a certain sacramental relationship with the Church (cf. Vatican II, Unitatis Redintegratio 3; Catechism of the Catholic Church 1271). They are also joined to the Church by their intention to enter it, as are the unbaptized who intend to do so: "Catechumens who, moved by the Holy Spirit, desire with an explicit intention to be incorporated into the Church are by that very intention joined to her. With love and solicitude mother Church already embraces them as her own" (Vatican II, Lumen Gentium 14:3; CCC 1249).

Thus, even before one is fully incorporated into the Church, one can enjoy the status of being recognized by the Church as one of her own, precious children.

NIHIL OBSTAT: I have concluded that the materials presented in this work are free of doctrinal or moral errors.